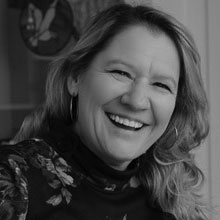 Su started her career on international film sets in Vancouver, Canada then moved to Germany in 1993. Here she became an editor for film and television for several years before turning to further education where she has taught at the RTL School for Journalism and the ifs, international film school of Cologne. In 2001 she took on the role of "Head of Department for Editing, Picture & Sound" at the ifs. In July 2012 she took over the position of “Head of Studies” which includes the responsibilities of accreditation and supervision of all M.A. and B.A. programs at the ifs. Since 2018 she has been an active member of the Standing Committee for Diversity, Equity and Inclusion (SCEDI) within and for the global association of film schools known as CILECT (www.cilect.org). In 2021 she completed her MA in Leadership degree at Royal Roads University in Canada and is heading the future.film.education project at the ifs.