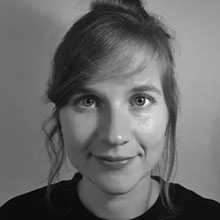 Louise Adams is the project manager of the future.film.education project and is involved in the research groups.

She holds a bachelor’s and master’s degree in media and cultural studies and completed study and research stays in Germany, Greece, Spain, Austria, France and Namibia. She was awarded the prix d'excellence of the FGU (Franco-German University) for her intercultural competence, social commitment and academic achievements. Her research interests include cultural and commemorative practices, postcolonial & gender studies, film and visual culture.
As associate for international affairs at the ifs internationale filmschule köln, she oversees and advises international students, coordinates student and staff exchange programmes and manages cooperation with international partner schools and organisations.